skip to main | skip to sidebar

Received an eMail from a immanent 2907.50.91 owner yesterday, followed by further truly enjoyable further dialogue between the two of us which is excerpted for readers of this Blog.

... I purchased one of these a couple of days ago and should be picking it up around the 5th of Oct.

Purchased in New Delhi and will be brought into Bangalore, when I will be able to take some pictures. Can't wait :-)

This is my third Omega and the second one that I have bought. The first one was a Seamaster calibre 562 (1956?) that belonged to my grand father. It was discovered long after he passed away and the watch was lying dead. The AD wanted to replace the balance wheel and the spring. Told him to hand it over. I opened and serviced it and it is now running perfectly - about -10 to 15 seconds a day. Need to tweak it a little more. Looks like it can do better, since it is very accurate.

A friend of mine in Delhi wanted to sell this. He had had this for a little less than two years during which he wore it less than a dozen times. The black rubber strap does not have the tell-tale bend of having been worn much. He wants to move to a Rolex and I was very happy to help him on his way :-) It has no marks, no scratches nothing. Even the AR coating outside is perfect. Can be called perfect - AND it is not for sale :-) The only thing missing is the box - pity. Wondering if Omega will sell me a replacement box.

Before the Omegas my top end was the T-Touch Expert. One of about 20 watches that I have.... 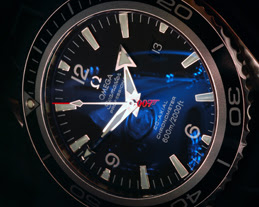